Back in December of 2007 I published a review of what was then a brand new product: magicJack. It was an innovative product at that time, allowing one to make free Internet calls. The only major catch for me was that it connected directly to a computer and the computer needed to be on in order to be able to make a call.

Recently, I purchased an updated version of the product, called magicJack Plus, which does not require a computer to use it (although you can use it that way if you wish). You do need to connect it to a computer to set it up and register it and assign a phone number to it (either a new number for free or transfer an existing number for an extra charge), but once that is completed (and you've made sure to download any updates), you can set it up to use without a computer. 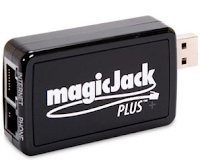 That's it. Just pick up your phone and start making calls.

The cost? Well, I ended up missing a sale and paid full price for the device, which ended up coming to about $80. That got me the device and one full year of service. I skipped the option of purchasing an additional 5 years of service for about $100 (which comes to about $20/year), and so if I don't get another chance at choosing that deal before the first year is up, it will cost me about $30/year for service. And yes, I said per year, not per month. So let's do the math at the no-discount rates:

That seems like a pretty good deal to me. And if I'd managed to get the device on sale, or took the 5-year deal, the cost would be even lower.

There have been a few odd glitches, such as a dropped call or two, and a high-pitched tone that occurred suddenly for a few seconds on one call. And for some reason for a few days I was not able to call magicJack's own free conference calling service (got a busy signal). But other than that, no real issues so far.

Some added features include getting an email when someone calls and leaves a message. In the email is an audio file with the actual voice message. And the wireless phones that I connected actually display that I have a message. Otherwise, when you pick up the phone, instead of getting the dial tone you would first get a different kind of beep that would indicate you have voicemail.

I still have a land line, because in a power outage Internet phones (such as the phone lines provided by cable companies and phone company internet services and magicJack) won't work, and cell phones only would work until their batteries ran out (and assuming the cell provider could provide service). But as long as my internet service is working, I can make free calls at any time and don't have to wait until after a certain hour to make calls on the cell phone that don't use up my limited number of minutes.

I should point out that support is only via Internet chat. There is no phone number to call to talk to someone. That said, however, my experience so far has been positive -- but know that the knowledge of some of the support folks (as with many companies) is limited to what is publicly documented. They do try, and will transfer you to someone else who might be able to answer your questions or solve your issues if they cannot.

I purchased my unit directly from magicJack.com, but you can also find it elsewhere, such as at amazon and TigerDirect.

Black Friday or Cyber Monday or any other day

If you shop at one or more stores online, then you might find that http://ThisIsMyStore.com makes your life a whole lot easier. Check it out - and have fun shopping.
Posted by Editor on Monday, November 19, 2012

Updated: Polkast - Connect To Your Computer From Your Mobile Device

At ShowStoppers for the Holidays this past week, I had the opportunity to learn about a new application that allows users to access the files on their Windows or Apple computer directly from mobile devices such as iPhone, iPad and most Android devices. That application is called Polkast.

According to the website: "Polkast is secure – - we never store your files, and your account is protected by password and SSL encryption — the same methods used by banks and the military."

I just loaded it onto my Windows 7-based PC and also onto my Android-based smart phone. Both actions were pretty simple. During the installation on the PC I needed to create an account using an email address. To take advantage of the fastest mode, I turned on WIFI on the phone and then launched Polkast. I then logged in with the account I created and chose the displayed computer as what I was looking to connect to. Because there is a lot of stuff already on my computer and because I was simultaneously downloading updates to other apps on the phone, it took a few minutes before Polkast completed figuring out what was on my PC.

Once everything was in sync I was able to quickly access music and photos and such on the computer. The computer needs to be on and not in sleep mode in order for this to work.

Although I have several user IDs set up on the PC, Polkast assumes I am the Administrator and logs me in as the Administrator with access to documents in the Administrator's folder but without asking me for my Administrator ID password. I cannot, however, see files and photos and such that belong to other users on the computer. To me this is something that needs to be revisited so that I could actually connect to the PC as a particular user with only the rights associated with that user ID.

Luckily I have most photos, videos, and music in public folders and so I was able to view and/or listen to them and could also choose to download them to my phone.

I then turned off the WIFI on the phone and accessed the computer from the phone. It was a little slower, but not any slower than waiting for a website to load. (I am on a 3g network.)

There are some other features that I have not tried out yet that sound interesting. These include posting photos that are on the PC to Facebook from your phone or other connected device; sharing specific files with others; connecting even more devices to the computer.

The free app allows unlimited devices to be connected to one computer. If you need to be able to connect to multiple computers, there is an upgrade available for $4.99/month. If I understand this correctly, you can do this for a month or you can sign up for a year at a time.

Polkast is referring to this product as a "personal private cloud platform for the post-PC era". This is an interesting product and removes the need for first uploading files to the cloud or to some other device on a file by file basis before you can share it with others or even access it remotely.

So I [originally] recommend[ed] checking Polkast out, keeping in mind the issues I've cited. However, I did additional testing by going out and traveling some distance away and trying to connect. First I tried over 3g and it would not connect. Polkast told me the pc was offline. Then I switched to WIFI. No change. Came home. Checked the PC. It was not sleeping. Tried again via 3g. Still didn't work. Turned on WIFI (the same network the computer is on) and finally was able to connect again. Switched back to 3g. Not connected. Strange that 3g appeared to work earlier.

So at this time I can only recommend it as a way to access some items on your PC from a mobile device so long as you are on the same WIFI network as the computer you wish to connect to.